Diabet 2 is the unique, new and original product, of natural origin, developed from the cereals micro flora intended for human nutrition. It is enriched with vitamins and metabolic active minerals. The product has been precisely tested in clinics after the methodology and protocols used in medical studies for the introduction and application of new nutrition supplements. It has absolutely no harmful side effects.

Its high metabolic efficiency was proven in removing or decreasing of all metabolic disorders which lead to arteriosclerosis and diabetes type 2, the most widespread health problems of the modern world.

Effects proved during the research in the years 1996-2012


The product is proved and recommended by Prof. PhD RADOSAV DRAGOJEVIĆ, endocrinologist 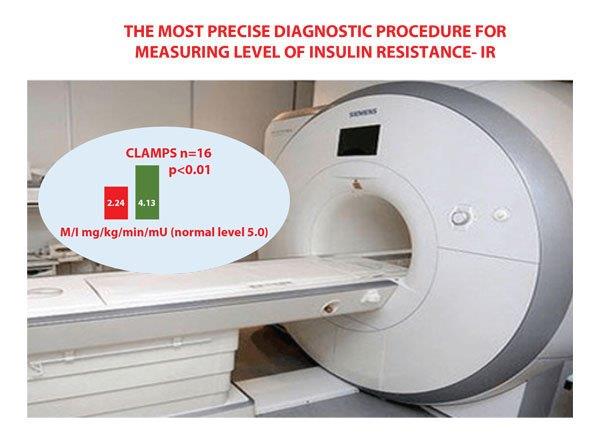 We have based our proof on the CLAMP method. This diagnostic for determination of INSULIN RESISTANCE– IR is in endocrinology the same value as the magnetic resonance in diagnosing the most hidden morphological changes in medicine, a criterion for precision and reliability. The diagnosed, at the beginning much expressed IR of only 2.21 measured by this maximum precise diagnostic test, conducted on sixteen examines, improved its metabolic processes bringing them close to normal values.

More precisely, the Insulin Resistance- IR was reduced from 2.21 (red column) to 4.13 (green column)!! It is necessary to remember that persons without IR have the value 5.0. So, the presence of a metabolic disorder (IR) at the beginning got significantly better. The testing was performed in a strictly controlled clinical environment. The achieved result has a strong health value of a unique preventive potential, which common medicine has not been able to produce.

According to our evidence, there has not been any published information about a product with similar properties and health benefits which is available in health institutes worldwide. Thus, Diabet 2 strongly enhances the efficiency of insulin affect by reducing Insulin Resistance- IR. The effect of such action is a significant reduction of insulin concentration in the blood. This is how the organism defends itself from the harmful excess of insulin. At the same time, pancreas is relaxed from accelerated exhaustion due to blocking of insulin's strength by reducing its harmful excessive concentrations in the blood.

The new metabolic benefits include accelerated and optimal use of energy from lipids and glucose. Their blood concentrations are reduced. The overall functionality of the organism’s vitality and resistance get higher. All known metabolic “risk factors” including hypertension, get lower or disappear. 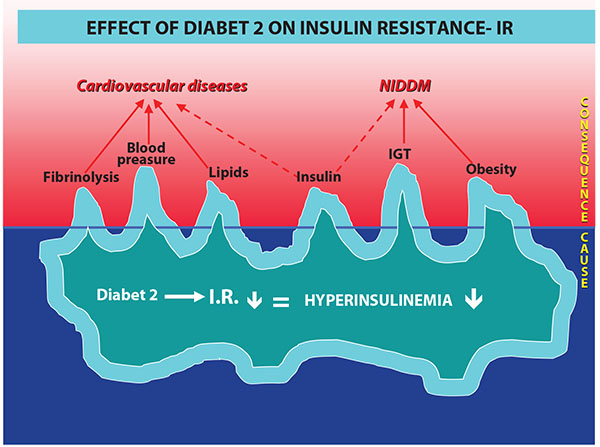 Due to influencing on the basic cause, Diabet 2 can simultaneously achieve many valuable and positive effects at the same time, which leads to reduction of drug usage. Diabet 2 also reduces or eliminates the foundation responsible for health endangerment and disease occurrence.

For the first time in medical practice one can carry out personalized, professional, documented and effective steps at the right time. Prevention is needed due to the well-known presence of high health risks, which are present in epidemic levels even in younger generations.

In former practice, health endangerments were only “monitored” by common measures and advices. Due to this the majority of patients were taking these common measures and advices badly because of weak motivation for change. The results of this are increased sickness, dying and total healing costs, which impact individuals and our global society. These illnesses can now be prevented! It depends only on us! Scientific solution for the problem is here! This solutions is especially effective, if combined with methodologic physical activities, defined as the medicine for the 21st Century! It is Diabet 2!

All 150 examinees in the conducted scientific clinical research (1996-2001) at the Clinic for Endocrinology VMA (Military Medical Academy) in Belgrade, Serbia, diagnosed as diabetic type 2 were tested on insulin concentration and its depending metabolic. The examinees did not change their previously accepted life style (diets and physical activity) during the research.

In order to show clarity, the results of all examinations are shown in the form of a diagram, with calculated values of statistical significance. The precisely achieved significance of change is evaluated. It is the same scientific model which is applied in expert medicine literature which are accepted as scientifically serious.

The accompanying extensive comments of the results shown in graphs are given to allow the less educated readers to be informed about the health factors and the importance of achieved results in a competent and detailed manner.

The significant reduction of insulin blood concentration is proven! 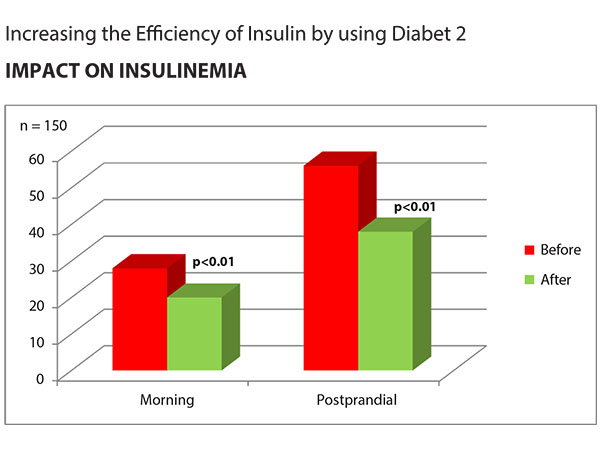 The graphic representation of insulinemia means that average results of all 150 examinees before and two hours after standardized breakfast (maximal response) is given.

Insulin concentrations which were provoked by meals show even more clearly functional hyperinsulinism: hyper secretive response after breakfast, which is otherwise the main characteristic of this functional disorder (disturbed regulation). What happens with this functional disturbance? The green column (postprandial) shows, that the pancreas after turbulent provocation with meals reacts completely different after being treated with Diabet 2. The organism functions more calmly and with almost 50% less insulin concentration, which means an enormous health benefit.