The use of Diabet 2 in blood pressure regulation

If Diabet 2 is used regularly, it significantly lowers hypertension!

The relationship between enhanced insulin values and blood pressure is well documented and explained in detail in numerous researches. The frequency of hypertension in the common population (the most usual factor of health risk), with clear tendency of further growth of this frequency, hypertension represents a first-class challenge for the modern practice in medicine.

Many mechanisms are described and demonstrated, where enhanced insulin concentrations have impact on the increase of blood pressure. 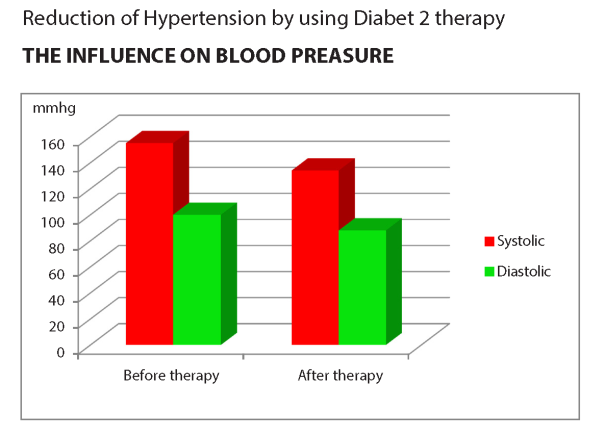 The realized therapeutic effect on the blood pressure was clearly proven for the first time in this clinical research.

Because of the targeted selection of examines who have all characteristics of metabolic syndrome, average values of blood pressure were enhanced, this has been one of the criteria for this diagnosis. They are represented by red columns which are values defined by clinical criteria defined as a degree of hypertension, which has to be treated with medication. In this research that is the hypertension which is therapeutically inadequate corrected.

During the research the existing models of hypertensive therapy were not changed. Eventual reduction of the existing prescription was made according to the level of blood pressure.

After therapy with Diabet 2 the achieved blood pressure values were in the ranges of optimal therapeutic targets (green columns). It is known, that the reason for hypertension in this syndrome, a result of Insulin Resistance, is the direct presence of chronic hyperinsulinism.

Because of this fact, the achieved effects on the blood pressure level have expected and logical explanation. Using Diabet 2 in the healing of hypertension one realizes optimal therapeutic intervention due to acting on the cause of the problem.